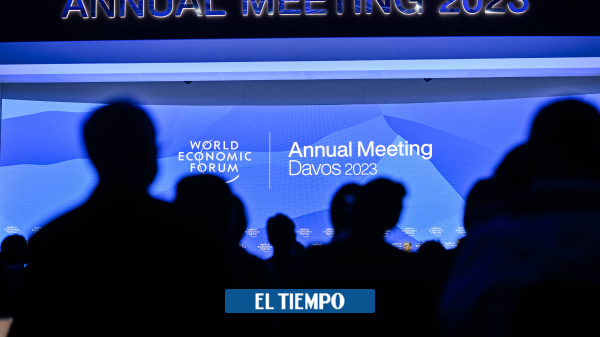 When in January 2020 those attending the meeting of the World Economic Forum (WEF) in Switzerland registered the news that they spoke of a highly contagious virus appearing in China, the reaction was calm. The scientists present on that occasion assured that, Just as it had happened in several previous emergencies with respiratory illnesses, this one would be contained without too many disturbances.

Less than seven weeks later, the World Health Organization gave the coronavirus, already identified as the cause of covid-19, the qualifier of a pandemic. Overnight, what seemed to be a manageable risk became the worst health emergency in the last 100 years, which to date has accumulated more than 673 million positive cases and 6.7 million deaths.

After the initial alarms went off, for many months social distancing and the use of masks will become the norm. Face-to-face meetings ended up being replaced by virtual ones,Something that also forced the Davos player to go into cyberspace.

Also read: How the Colombian economy can function without exploring oil and gas

Several attempts to return to face-to-face activities ended up failing, given the successive spikes in infections. Only until May 2022 did people return to the Swiss canton of Grisons, not without the requirement of a negative test taken 24 hours before and one more test at the time of accreditation.

However, this verse in late spring, with the warm wind coming down from the mountains dressed in green, and not white, was an unacceptable break with tradition. Those who know say that Professor Klaus Schwab himself, creator and president of the foundation that organizes the event that brings together the cream of capitalism on the planetHe insisted that we had to go back to the usual date.

As a result, between Monday and Friday, the streets of the small town were once again invaded by thousands of people willing to pay outrageous amounts for a hotel room, accompanied by assistants and high-end vehicles. Snow and freezing temperatures were present, so it would be easy to conclude that things were back to the way they were.

But appearances are deceiving. Although at first glance everything is similar and the postcard landscape is the same, the world today is very different from that of three years ago. And it is that apart from the pandemic came the economic recession, the resurgence of inflation, increases in interest rates and geopolitical tensions. As if the above were not enough, Russia’s invasion of Ukraine – apart from its incalculable material and life losses – became a tipping point, causing a significant and lasting increase in defense budgets on both sides of the Atlantic.

We recommend you to consult: What did President Petro talk about with the director of the FBI?

For that reason, the term ‘polycrisis’ ended up being coined to describe the atmosphere that surrounded the deliberations of the last few days. Although reluctantly, the defenders of a quote, which was considered a symbol of globalization, now affirm the existence of a fragmented world and not only because of the well-known tensions between Washington and Beijing.

In the field of production, for example, the norm that is imposed is the certainty in the supply. The first alert bell rang due to covid-19, when it was startled that others could not be depended on to have essential supplies such as masks or fans for intensive care units. Now the concept goes further.

The cut in gas shipments that Russia sold to Western Europe led the Old Continent to look for other options in order to ensure power generation. hello includes facilities to bring fuel from other places, as well as the reactivation of coal plants and prolonging the useful life of nuclear power plants.

We suggest you read: Gustavo Petro: «We are going to collective suicide by clinging to the market»

In addition, the United States took steps to guarantee its autonomy in the matter of microprocessors. More recently, the move has been in favor of green growth, which implies fiscal stimuli either to build factories for solar panels or electric vehicles,Something that will be answered by the Europeans with similar cutting measures.

In this way, a new era for industrial policy emerges in which the conditions are created with the intention of promoting sectors considered strategic, including support packages valued at hundreds of thousands of millions of dollars. Its main tool is no longer protectionism based on raising tariffs, but a more sophisticated scheme that combines resources and preferential access to attractive markets, which puts emerging nations at a clear disadvantage.

The latter, by the way, face significant obstacles. Apart from what happened in Ukraine, which resulted in greater food insecurity for those who import cereals, the higher prices of food and hydrocarbons have deteriorated the quality of life of millions of people and are the cause of growing dissatisfaction. Many governments that borrowed in order to deal with covid-19 saw the cost of those debts skyrocket, reducing the space to increase public spending.

Also read: Colombia announces a summit of Amazon countries in Davos for May

Financing energy transition programs or other transformations with higher interest rates becomes difficult. Hence, the perspective is that the gap between the rich north and the developing south will reopen, origins giving migratory tensions and humanitarian crises.

A few panelists in Davos express their concerns about it. However, what mattered to the majority is that the prospects for the world economy in the short term are improving and, in particular, those of the powers. The others can be beneficiary of a greater commercial dynamism and good prices of raw materials.

The United States appears to have brought inflation under control and will grow at an acceptable rate with historically low unemployment. Europe would manage to avoid recession, despite the restrictions caused by Russia. And China is in the midst of reopening, deciding to live with the virus, which will surely translate into a wave of suppressed consumption.

This does not mean that the outlook is clear. Inflation has not yet returned to the fold, so most banks will keep a tight rein and continue to clamp down on demand. In turn, the war continues and any turn it takes is potentially dangerous, since a cornered Putin causes as much anxiety as a victorious one. No guru completely rules out another pandemic, or a bursting of the debt bubble, apart from the increased incidence of cybercrime and the increasing impacts of climate change.

To complete, there is what former US Treasury Secretary Larry Summers characterizes as “hyperpopulism”. As he said on Friday, during the panel with which the Forum concluded, «the economy proposes and politics disposes.»

Politics was precisely put to great use in Davos. Although only one of the representatives of the Group of Seven – the German Chancellor, Olaf Scholz – made the trip to Switzerland, fifty Heads of State and Government from four continents were present.

One of them was Gustavo Petro, who played the prophet of disaster by pointing out that «the climate crisis could extinguish all life on the planet, including humans, something that would happen not in centuries but in decades.» Remedies exist, but for the president, «the expanded and deregulated search for profit, the engine of capitalism, will not allow clean technologies to replace fossil fuels.»and those do not demonstrate a greater capacity to increase productivity”.

Faced with this diagnosis, the proposed solution is «decarbonized capitalism», which «would have to ensure that the climate agreement seeks bluntly to reduce the consumption of coal, oil and gas until it reaches zero emissions in the short term» . This would imply «changing debt for climate» and «doing away with tax havens.» Otherwise, and as the only way out, it would be necessary to recover «the planning power of nations.»

See also: How the Colombian economy can function without exploring oil and gas

These ideas were received with polite applause when they were presented at a panel held in the great hall of the Congress Center. Although some media recorded what was said, the major international press ignored approaches that recall a debate that has been going on for decades: the market economy that identifies capitalism against the centralized planning that was launched by the former Soviet Union, with the known results.

Undoubtedly, we receive more attention with the announcements regarding the Amazon, whose future is cleared with the coming to power of Lula da Silva. The revitalization of the so-called “lungs of the world”, which would include a summit of the nine Amazonian nations in May, aroused notorious interest in an event whose program included dozens of meetings to discuss everything related to the environment.

Formulas and experiences were discussed between representatives of the private sector and governments. Despite the fact that 90 percent of the additional power generation capacity installed last year came from renewable sources, there is awareness that much more must be done.

However, the apocalyptic vision of the Colombian president is shared by few. Al Gore himself, in vehemently calling for action, expressed his confidence that innovation and competition can provide the answer that humanity needs.

Surprise departures, such as that of Minister Irene Vélez when she reiterated that Colombia will not sign more hydrocarbon exploration contracts, were described as abnormal by an executive who heard her live when she spoke in the Aspen room of the Congress Center. The prevailing view is that it is the use of fossil fuel revenues that will finance the gradual transition to non-polluting options.

Vélez’s proposals once again highlighted that there are different and discordant visions within the Petro administration, as the British newspaper The Guardian highlighted. While the ministries, José Antonio Ocampo, spoke in panels of experts and met with bankers and investors to provide some peace of mind regarding the Colombian economy, on the other hand, a shadow of doubt was generated about the main line of resources and the exports.

Although for the vast majority of delegates the lack of coherent language on the part of the national delegation went unnoticed, this was not the case for those who own investments in the country, some of whom expressed their concerns. «Colombians will pay the consequences,» says analyst Moisés Naím laconically.

For this reason, the balance of the World Economic Forum leaves a bittersweet taste. On the one hand, the expectation that things on the planet this year will turn out a little better than what was raised a few weeks ago. On the other, «the perception that Colombia has ceased to be a predictable place in its policies,» according to former minister Mauricio Cárdenas, present at the event.

This predictability had been built by the leaders of different governments, starting with César Gaviria in 1992. Those who followed him in office delivered a similar message, one that started from recognizing the problems and insisting on the potential of a vibrant society located in a territory full of of resources.

Now that tradition has been broken and is being replaced by a big question mark. The reason is a particular reading of the environmental threat, combined with proposals that clearly call into question not only the stability of the Colombian economy, but also the benefits of the market and free enterprise.

Even so, only the passage of time will tell if the intense cold that was felt on the outskirts of the summit has repercussions in this corner of South America. Many of those who go to Davos do so in search of answers. It is a pity that, as far as we are concerned, the questions that remained floating in the environment are more than the certainties.

IMF forecasts an improvement in the global economy, but pessimism grows in Colombia – Sectors – Economy

Back to School Credit Options | my finances

What is the mysterious spiral that has appeared in the sky of Hawaii?

Dodgers announce Fernando Valenzuela’s No. 34 will retire this season